Americans Plan To Splurge On Holiday Gifts This Season

The 2015 holiday shopping season "officially" kicks off with quickly approaching Black Friday, although many American consumers began their shopping this past September. So how much will the average consumer plan to spend on gifts the year? Predictions for 2015 show shoppers splurging more than years past.

Gallup’s November update of American’s 2015 holiday spending plans finds consumers on average anticipate to spend $830 on gifts this year, up from $720 in 2014. This increased budget is the highest U.S. consumers have planned to spend since 2007, where consumers estimated to drop $866 on holiday gifts. The least Americans planned to spend in recent years was $616 in 2008.

So how did Gallup determine this spending average? According to the poll, the breakdown went like this:

The National Retail Federation is also predicting lofty expectations for 2015 consumer holiday spending. The NRF expects November and December sales to increase 3.7% to $630.5 billion. This number is much higher than the 10-year average of 2.5%.

Despite this increase in spending, NRF President and CEO, Matthew Shay, finds that Americans may expect to spend more, but they are not confident it’s the best decision. He explains that “while economic indicators have improved in several areas, Americans remain somewhat torn between their desire and their ability to spend; the fact remains consumers still have the weight of the economy on their minds”.

Do Americans’ Spending Expectations Change Throughout The Shopping Season?

Gallup’s initial survey in October showed American consumers set to spend $812, revealing an $18 increase come November. In past years, however, the trend appeared in the opposite direction. Both 2014 and 2013 showed expected decreases in spending, each year down $61 and $82 in November, respectively. 2010 showed the smallest difference in October to November spending expectations, with November spending decreasing by $1. 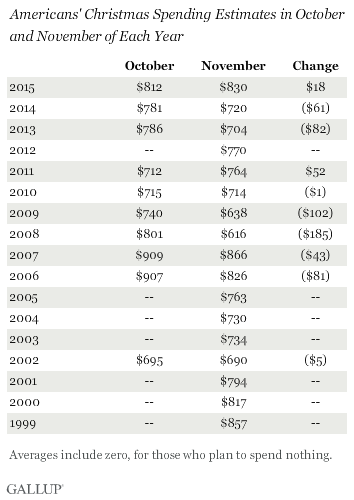 What Factors Could Sabotage This Expected Increase In Spending?

Economic factors are the most common influencers on consumer spending. The NRF notes that another government shutdown in mid-December or a “slower pace of job creation and income growth” could negatively affect these expectations. Also, retailers themselves could be at fault for decreasing consumers’ expected spending. Price, value, and timing also play big roles in influencing shoppers to spend more. This means retailers will not only have to competitively price their products, but ensure their product offerings and store hours are better than their competitors.

If Gallup and NRF predictions pan out, consumers should spend the most this holiday season since 2007. 2015 is also the first year since 2011 consumers predicted to increase their spending following Gallup’s initial holiday spending survey in October. If the economy does not experience any hiccups and retailers promotions and products are in-line with customers’ demands, all should pan out according to these initial reports.

Looking for a better way to connect with customers and survey respondents? Contact us today to learn how Instant Census SMS surveys can help you achieve higher response rates and faster response times on your next study!