“I just bought an adult coloring book. Are you judging me?” a friend texted me a few months ago. I wasn’t judging her for the purchase, I was intrigued. Slowly, other family members and friends began purchasing adult coloring books as means of relaxation and stress relief. Soon enough, I had purchased one myself and was coloring in it nightly after work. It was awesome and I was now a part of this growing trend that was allowing adults to re-live their childhood through paper and colored pencils.

Research from Nielsen’s BookScan from the 2015 U.S. Book Industry Year Review, shows younger women are driving the adult coloring book sales, with 71% of buyers being female and the largest representation of that number coming from the 18-29 age group. In fact, Nielsen reports Millennials are over 29% more likely to buy an adult coloring book than all other buyers.

Coloring book sales in general are strong, with 12 million books sold in 2015, up 1 million from 2014. Coloring books also proved to be a popular gift for the holidays, with 3 million of these books being sold from November to December. And as demand rises, so does production for these books. 2,000 adult coloring books were published in 2015, up from 300 in 2014.

Coloring books’ growing popularity has caused a rise in sales for colored pencils, a necessary item for such artists. Also in 2015, Americans spent $128.2 million on colored pencils, which is up 47% from 2014. 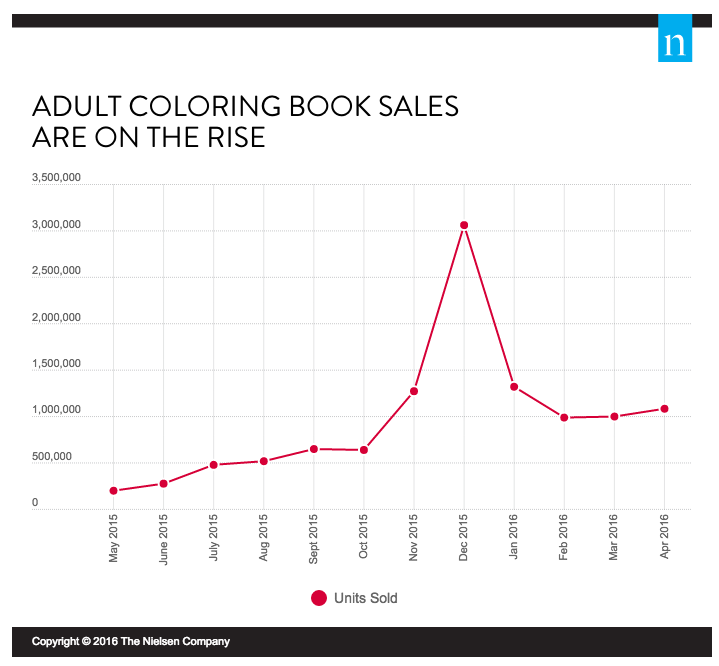 Want to learn more about using automated text messaging for Market Research? Get in touch!