Will Text Messaging While Walking Soon Be Illegal? 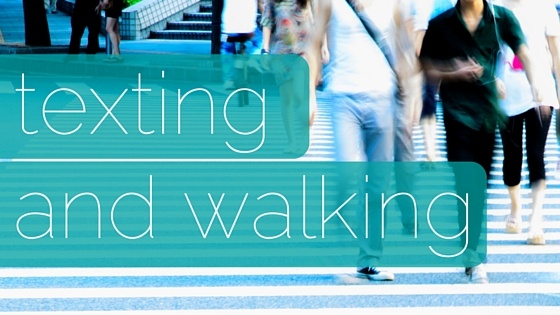 A New Jersey lawmaker has had it with people texting and walking, and 1/3 of Americans stand with him. Assemblywoman Pamela R. Lampitt is proposing a bill that would impose a $50 fine and possible 15 days in jail if caught walking while texting on sidewalks and next to traffic.

Lampitt’s aim is to reduce the amount of “texting while walking” fatalities, as there has been an increase in incidents over the past few years. In 2015 the Governors Highway Safety Association reported:

“Since 2009, pedestrian fatalities have increased by 15 percent to 4,735 in 2013.…Nearly two million pedestrian injuries were related to cellphone use, the report said.”

Another study by Safe Kids Worldwide found that “40 percent of teens said they had been hit or nearly hit by a car, bike, or motorcycle while walking.” The study went on to find that of those surveyed, “20 percent were talking on the phone, and 18 percent were texting… .” A recent Rasmussen Reports phone survey also found 37% of American Adults are in favor of passing a law in their community that prohibits pedestrians from texting or talking on the phone while attempting to cross a street, 48% oppose it, and 15% are undecided.

Even while research says distracted walkers are more likely to ignore traffic lights or fail to look both ways before crossing the street, Lampitt admits she will have difficulty passing the law. Similar laws have not passed in Nevada, New York state, and Arkansas, setting a precedent for Lampitt’s proposed bill.

Dr. Joseph O’Neil of Indiana University Health, who helped draft Indiana’s ban on texting while driving, admits that texting while walking is certainly a distraction, but isn’t so sure a law is needed to restrict the behavior. “I think common sense should prevail. I don’t know if we need to legislate down to that,” he said.

For now, it doesn’t seem that Lampitt’s ban will be put into action anytime soon, but that doesn’t mean the issue should be taken lightly. Keep yourself distraction free while crossing streets, walking on sidewalks next to traffic, and driving.

Want to know the appropriate times to send automated text messages to your audiences to ensure they are in the best position to respond? Contact us for more information!